This article is to be read after the episode has been seen, as and as a result may contain spoilers up to the episode that it’s covering, but no further. So if you haven’t seen the episode yet, go and watch it. Then come back and read this. Then watch the episode again. Then read this again.

Meereen looks a bit like Aku-Aku from Crash Bandicoot in the opening credits.

Let’s kick off with Arya’s story in Braavos. We saw Braavos very briefly in season 4, when Stannis and Davos visit the Iron Bank to ask for money. But now we get to see the city alive. So, Braavos is one of the Nine Free Cities – that is, cities in Essos (the eastern continent) that do not follow a king. Instead, Braavos is ruled by a Sealord. Cast your mind back to season 1, and the wonderful Syrio Forel (“not today”). Syrio was the First Sword to the Sealord of Braavos. Kind of a big deal. Braavos is a bit like Venice with Britain’s weather. It’s built on a load of canals, so boat travel is the most efficient way of getting around. We follow Arya as she finds the House of Black and White, the episode’s namesake. This is home to the Faceless Men: the organisation of assassins that Jaqen H’ghar is part of. OMG book spoiler – the old man in the books is never actually revealed to be Jaqen, though there were theories, so this is an interesting turn of events. Side note: one other thing that I did notice is that Arya’s list has gotten substantially shorter…no more Thoros, Beric or Mel, or Ilyn Payne. Has she forgiven or just forgotten…?

Sticking in Essos (it’s a pretty gosh darn big place), we caught up with Varys and Tyrion on their way to Meereen via Volantis. Volantis is another of the Free Cities, located at the very south of the map (Braavos is pretty north). Notably Volantians include Talisa – Robb Stark’s baby momma. Whilst we wait for Varys and Tyrion to catch up, let’s travel to Meereen ourselves, kids! As you can see, this episode saw Daenerys making a tough ol’ decision. The title House of Black and White may well refer to Dany’s decision of killing Maran…Meren….Maranana…I can’t remember his name. Not important. That guy. Personally, I think she did the right thing, though as we saw, it led to a riot between the old Masters and the freed slaves. Interesting, parallels can be drawn here with both Robb and Joffrey: Robb had to execute Rickard Karstark for killing his prisoners, just like Daenerys. Joffrey had to run from the lynch mob throwing rocks and poo, just like Daenerys (though maybe not the poo). What does this mean? Who knows!

Over to Westeros. Once again, Brienne’s bad track record proceeded her. Though, I can’t help but think that she didn’t try very hard before running off in a huff….though it did prove how bad-ass is she is. Notice as well, Sansa’s bird-like outfits, mirroring Baelish’s mockingbird sigil. Could the title Black and White refer to them too, or is that too tenuous?

In King’s Landing, we see just how highly Kevan Lannister thinks of his niece. Kevan is very much his brother’s brother. He idolised Tywin, so you can imagine that Tywin’s death has affected him pretty badly. But Kevan ain’t no fool. He can see right through Cersei for what she is. Along with complimenting bumbling (but wonderful) Mace Tyrell, Cersei seems to be slowly manipulating what remains of the Small Council. She obviously hates Pycelle (who doesn’t?) and is trying to worm Qyburn in there. I’ve talked about Qyburn before, but we’ll have a quick recap. We first met him in season 3 in Harrenhal, where he came to serve Roose Bolton. After Jaime lost his hand, Qyburn stitched him up and escorted him and Brienne back to King’s Landing. Qyburn is a Maester, like Pycelle, Aemon and Luwin (RIP). However, Qyburn was banished from the Citadel (their HQ) for…unethical experiments. What these were exactly, we don’t know. But we do know that he used his knowledge to potentially save a dying Gregor Clegane (the Mountain) and he had a curious fascination with the dead dwarf’s head…hmmmm. 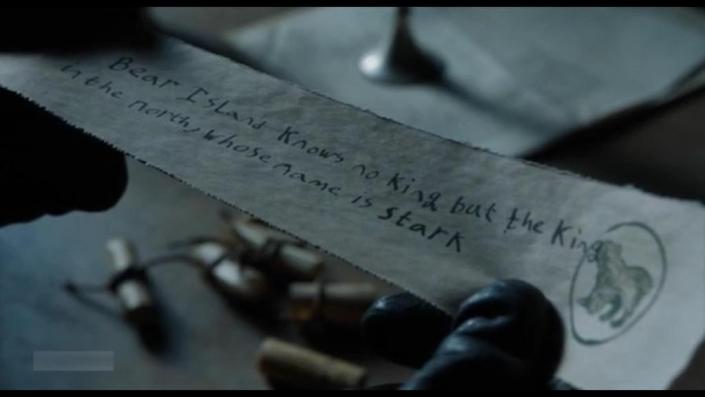 At the Wall, Stannis finally starts being awesome like his book counterpart, offering Jon Snow the goddamn North. The letter that Stannis received was from Lyanna Mormont, who is niece of Jeor Mormont (the old Night’s Watch Lord Commander) and cousin of Jorah Mormont. The letter is pretty awesome as it declares that, even though Roose Bolton holds the North and Stannis wants to take it, the Northerners bow to one king, and his name is STARK. Frickin’ awesome. One day, I hope that the Seven Kingdoms are ruled by the Starks and Martells. WHICH BRINGS US NICELY ON TO: 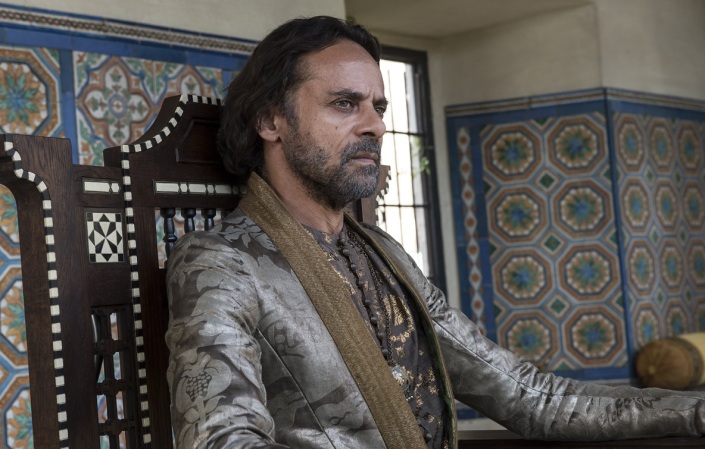 Dorne. Hell yeah. Personally, the Martells are my favourite house. About 300 years before the events of Game of Thrones takes place, Aegon Targaryen, known as Aegon the Conqueror, landed in Westeros with his dragons and armies and tried to take over. The whole country bent the knee, apart from Dorne. The Martells words “Unbowed. Unbent. Unbroken.” is a symbol of their resistance. Throughout the ages, the Martells have often been pissed on, but have never faltered and always risen above it. They are a strong house, somewhat isolated (both geographically and politically) from the rest of Westeros. Our first encounter with the Martells was through the fantastic, late Oberyn. We know that he was bent on revenge against those that murdered his sister, Elia, and her children. Elia, if you remember, was married to Rhaegar Targaryen, Dany’s older brother. The Mountain “raped her. Murdered her. Killed her children.” But you know all this. So the Martells are a bit bitter. But do they incite open war? No. Doran Martell – Oberyn’s older brother and head of the family, Lord of Sunspear – is cleverer than that. We briefly meet Doran in this episode. He is pretty much wheelchair bound due to severe gout (caused by the lavish Dornish lifestyle, some say). Doran may seem weak, but he is patient. He will bide his time, like so many Martells have before him. Partially, this is why I am so scared for Jaime and Bronn going to Dorne. I love the Martells, but gosh darn I hope those two are safe (this is a diversion from the books so I have no idea what’s going to happen!). We also briefly saw Myrcella (who has been recast) walking around the Water Gardens with a young man, Trystane Martell. Trystane is Doran’s son. In the books, he has another daughter, Arienne. Unfortunately, she seems to have been omitted from the show, but it appears though Ellaria Sand, Oberyn’s ex-gf, is taking on her character responsibilities. So there’s a little history lesson to wrap up this week’s episode companion. Now, please join me in staring at Daenerys’ ridiculous eyebrows until the sun rises.

Error: Twitter did not respond. Please wait a few minutes and refresh this page.