First, let’s take a moment to appreciate Doran’s awesomeness. Finally. After nine episodes, he is finally given his due. Doran is very smart man, and not at all rash like his brother: he bides his time. We see in this episode, though, that despite being in a wheel chair (from severe gout, if you remember) he still holds great power and is well-respected. It is unfortunate that these Dorne scenes have been pretty filler…and pretty awful filler at that, but it least it has nearly concluded without any serious causalities, and has provided us an insight (albeit small) into how Doran rules, and his motives. And Trystane’s weirdly hairy chest. 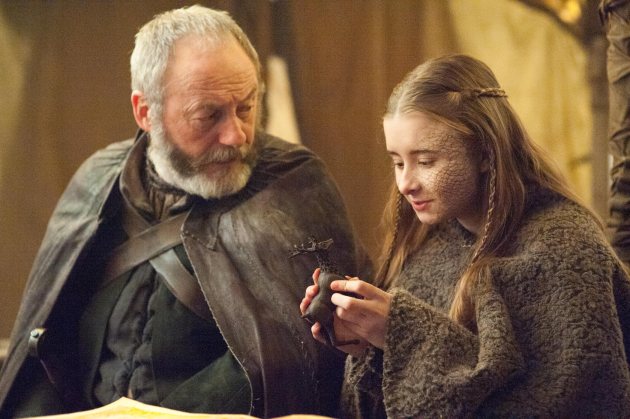 In all honesty, most of episode 9 was largely self-explanatory, so I’ll just focus on the two ‘big’ scenes of the week: Stannis and Daenerys. Let’s begin in the north. With winter closing in around them, Stannis and his army are truly struggling. Especially when scoundrels like Ramsay come and set stuff on fire. I can’t help but laugh at the irony as Melisandre steps out of her tent to a sea of flames and a Ponyta. How brilliant would it have been if the downfall of Stannis’ conquest was fire? I mean, after this week’s episode, but proxy it just may be! So, yes, Stannis sacrificed his daughter to the Lord of Light. Now I feel it’s important to add here that this has not (yet) happened in the books – book Stannis is currently trudging along in the snows with his army still, whilst Shireen and her mother stay at Castle Black. The main things that afflict book Stannis’ army is the lack of food and endless marching. This whole section of the book is also told from the point of view of a character that hasn’t even encountered Stannis once in this entire series, though whether or not they pop up in episode 10 remains to be seen. Despite not appearing in the books, Shireen’s sacrifice was apparently headed up from the evil mind of George R. R. Martin himself, and not from Benioff and Weiss – which is who most people will turn to blame when something happens in the show they do not like! So, why did Stannis do it? Well, this is my quarrel with the whole thing. We saw that lovely scene earlier in the season between Stannis and his daughter. Then, last episode, he shooed Melisandre out from his tent when she merely hinted at the notion of sacrificing Shireen. I feel that his decision would have been more believable if we had seen one more episode – one more scene even – of Stannis pondering it over, as opposed to this apparent sudden choice. My personal opinion on Stannis hasn’t really changed because of it – he did it because he thinks that it is the only way he can save the realm, essentially, and you could see the pain in his eyes as the execution is carried out.  I’m not saying it was right, or even justified, but in his mind it was the only option. The sacrifice itself, I feel, was almost inevitable, what with the amount of time dedicated to building Shireen’s sweet, innocent character this season, as well as the ominously foreshadowing conversation between her and Davos earlier in the episode. Also, Davos said something about hearing about her story “when he gets back”…and from past experience we know that in Game of Thrones, if someone says that, they (or the recipient of the conversation) are going to die… My personal prediction was that Selyse, at Mel’s bidding, was going to go behind Stannis’ back and do it, to which Stannis responds with a firm backhand, but in fact it was her mother’s crying, along with Shireen’s screams, that really made this whole scene very haunting. Stannis is truly desperate. He has made a number of speeches about the needs of the many over the few, and that sacrifices aren’t easy, “that’s why they are sacrifices”, but one cannot help but pause and wonder if the Stannis hype train is really going in the right direction… But then again, he sneakily murdered his brother and has sacrificed countless people in the past, so what’s so different about a daughter…?

Say what you will on the episode as a whole (though I quite enjoyed it), but you cannot deny that once again we were treated to an epic ending. What began with some well-choreographed fighting and a bit of Daario suave ended in what can only be described as slightly-bad-CGI-dragon-epicenes. Meereen, as we know, is plagued by the gang known as the Sons of the Harpy (RIP Barristan). These ex-slaves and Masters loath Daenerys for what she has done to their city, and won’t rest until her head is on the edge of a rusty blade. Apart from that, we still know very little about them, such as whether they have any ulterior motives, or even who their leader is. One of my guesses was Hizdahr, so I was extremely shocked and surprised to see him viciously stabbed to death (and felt a pang of sympathy). Now, there are those on t’internet who believe that Hizdahr’s death was staged, and that he is in fact still alive, and it was all a ruse…but I think it looked pretty convincing. I think he is pretty dead. This scene is somewhat similar to its book counterpart, the key difference being that book-Jorah is somewhere else (and Tyrion, too). Still, Drogon is drawn in by the scent of blood and lands in the pit, singeing all who come near, until Daenerys mounts him and soars into the skies, leaving behind the chaos to her bemused followers. Despite the questionable CGI, I thought this scene provided another brilliant end to a decent episode. Even Jorah’s Dark Souls inspired forward roll kill was pretty epic…though not as epic as the Spartan inspired spear throw. Well done Jorah.

Before we conclude, the word “Graces” was uttered by a character during this final scene – I forget who. Anyway, the Graces are a group of healers or priestesses in the area surrounding Meereen, led by the Green Grace, who acts as an advisor of sorts to Dany in the books. So far, they have been omitted from the series, so it’s interesting to hear their name dropped, even if it was for a second. Will we be delving more into the political side of Meereen next season? I’m also curious about the Unsullied, and how, for lack of a better word, shit they have been this season. The argument here is that they are not trained for this kind of combat, and lack proper field training, but nevertheless they got pretty much butchered by…well, civilians. I hope someone has an answer for this! I assume Grey Worm was resting in bed as this whole shabang went on…

As mentioned last week, The Dance of Dragons’ episode title is taken from the fifth book, A Dance with Dragons. Obviously, the title prominently refers to the climactic Meereen scene and Drogon, but it was also referred earlier in the episode via the book that Shireen was reading. The final episode of the season is titled Mother’s Mercy, so put your speculation hats on now and start guessing what that’s about!

Honourable mention of Mace’s singing, too.

Error: Twitter did not respond. Please wait a few minutes and refresh this page.